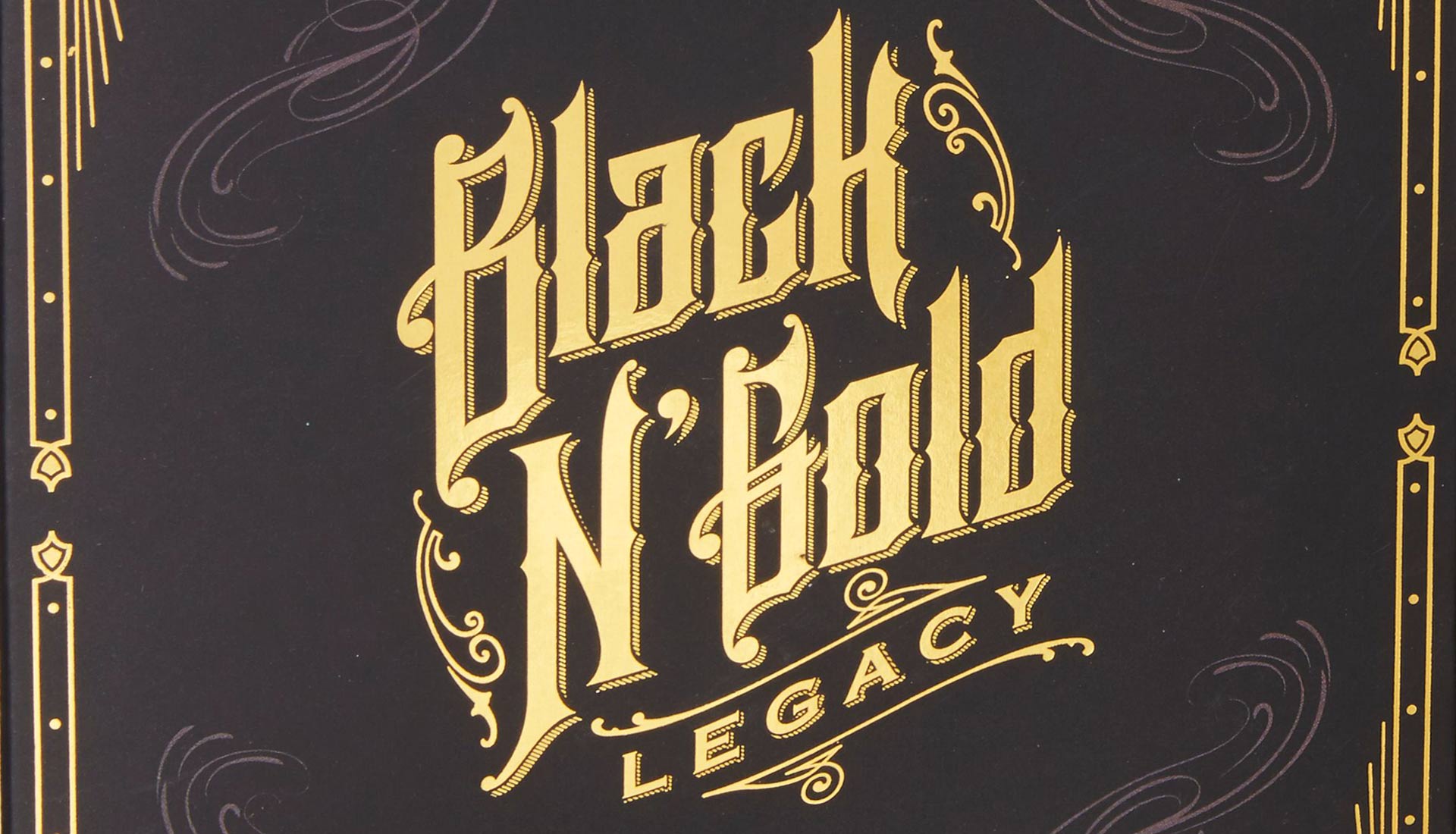 Posted at 16:33h in Uncategorised by BlacknGold 0 Comments
0 Likes

Josh Fisher is an artist and owner at Cavalry Tattoo Studio in Norwich, as well as being a long time Black N Gold Legacy user. We sat down with him to find out what got him into the community, what’s going on with the new studio, and why he loves Black N Gold so much.

When did you start tattooing? 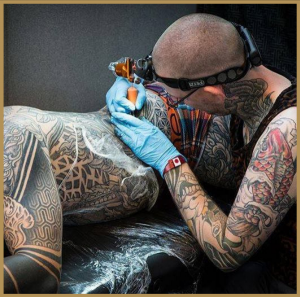 What made you get into tattooing in the first place?

Just a fascination with tattoos! I wish there was more to it but that’s literally it. I just really liked how really heavily tattooed people look and that was it, once I started getting tattooed, I couldn’t stop thinking about it. I just saw it and thought, “I want to do that”.

I got into it just before Miami ink and all those things came out and tattooing went massive. I remember the show coming out, it was about a year after I started that everything hit the tv and things went mental. Some people in the industry hated them, but it’s a bit like the Beckham thing of tattooing.

Everyone shit on it at the time but I reckon they’ve had a massive, massive impact on tattooing. Whether people like it or not it definitely helped everybody in the end.

Which Black N Gold products do you use, and how long have you been using them for?

How long have you been using them for?

I’d say around 3 years I think. It was annoying as I’d just bought a load of new grips from the brand I was using at the time. They were quite pricy, but I was struggling to find anything that was machined really, really well and could get the ink flow right without dumping ink everywhere, just something that was good quality. Then Cesar brought those out, just after I spent a fortune on this other brand, and I swapped everything over to Black N Gold straight away.

How did you find out about Black N Gold, and how did you get on board?

I probably saw them on social media. The quality is what attracted me. It was impossible, still is impossible, to find high-quality disposables other than Black N Gold.

It’s as simple as that, they’re machined so bloody well and they’re so strong because of the carbon fibre back stem. They’re just superior in every single way, I love them.

Tom who works here, he saw me using them and now he’s swapped over to them. If you look under the desk there’s a massive pile of Black N Gold boxes. I started off with just a small sample and after I used them that was it, straight in with a big order. 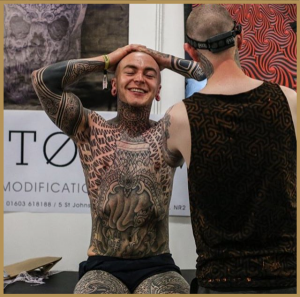 Do you have a favourite piece that you’ve tattooed?

There’s 3 that I’d say are my favourites.

One was my first ever bodysuit. I learned a lot on that. It took 2 years and we worked on it every other week. Off the back of that I then did a second bodysuit, and that’s probably one of my favourites, a big Thai floral sort of thing. Then the third is being part of a bodysuit. The front of the torso was done by Tomas Tomas, Xed LeHead, people like that, and then I was given the back and I did this monstrously big piece of Borneo from the back of his neck down to the back of his knees.

You’re currently opening a new studio, do you have an opening date set?

Technically we’re already open, but we’re going to officially open once all the signs and everything are done. We’ve been taking bookings since March but we haven’t made a big deal of it as we’re waiting for everything to be finished, then we’ll do a grand opening type thing. Hopefully by the end of July.

Were you always hoping to open your own studio? 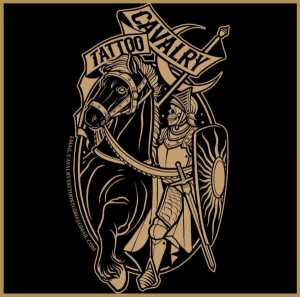 No! I never, ever thought it would happen, and I had no interest, to be honest. For one reason or another, situations change y’know, and it ended up being a great thing.

But I’m just one of 3, so that’s a thing. Everything’s split and it takes the pressure off. We all have our designated jobs. Hannah (Weston) is the clever one so she does all of the admin and things like that, I’ll do all the stock and the practical jobs and Tom (Bates) can do anything design wise as he used to be a designer.

Between us all it just spreads the load. We all end up with the same advantage.

The difference between us and a normal shop is that we’re not trying to capitalize off our artists, we just want to split everything. The problem is now a lot of shops are starting to be owned by external people. They don’t actually bring anything into the shop, they’re just an investor. I’ve seen quite a few shops like that and we’re definitely not one of those.

We’re a tattoo shop run by tattoo artists and that is where it’s going to stop, we’re not going to have external people involved.

That’s a lot like Black N Gold and that’s why Cesar is so good. He’s a tattooist who’s been tattooing for a long time, and a good one, and he knows what we need. He knew what we were missing, and he filled that gap and then bang, straight away you’ve got really high-quality products. No bullshit, no middle men or anything. 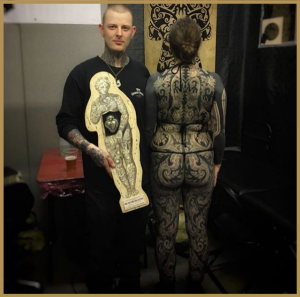 What sets you apart from other studios?

We just want to be a small group of high-quality tattooers, keep our bases covered and not drop the standard through greed, which is really common. A lot of shop owners just think “oh I can squeeze an extra person in and that’s gonna bring an extra however much a month”, but by doing that the standard drops and drops and drops. We just want to keep our bases covered, keep the work high quality and just have a nice time in the shop where everyone gets on, no drama. It’s about quality, not quantity.

What does the future look like for you, and for Cavalry?

Who knows? Hopefully it’ll stay nice and steady. Just keep going the way it’s going. We don’t want to cram ourselves, so many shops cram themselves. We’ve got room for two more people if we want. If the situation arises then perhaps we might have 2 more but it’s not something we’re actively looking to do. But if it happens, it happens. There are too many tattooers already and there’s more and more coming. The more there are, it’s just getting diluted more and more. Winter is getting difficult as it is, doesn’t matter who you are winters are slowing up, so we’re gonna be careful.

Do you have a preference between rotary and coil machines, and which do you use for different work? 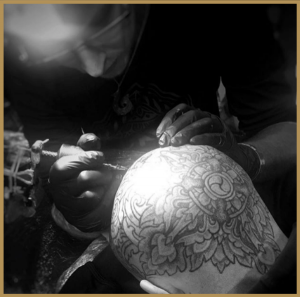 I use both. I find it embarrassing when a new tattooist has never even touched a coil. I learned everything with coils, if I’m filling really big areas of black then I’ll use a coil.

Obviously for dot work I use the Black N Gold rotary, it’s got so much power to it, it’s amazing. If I’m doing coloured areas or smaller areas of black, I’ll use one of these new-fangled rotaries.

The new types upset me because they’re not something you can fix. I had one break within 3 months y’know, and that’s not on. I’ve got coils in my drawer that are 35 years old and they are untampered, and these new things can break after literally months.

They’re obviously disposable. I was speaking to someone about it and they were ok with the fact that they had one that broke every year and needed replacing, but that would make my blood boil. I expect a machine to last! Obviously, rotaries do burn out over time, but even then I’ve got a rotary that was given to Xed LeHead 25 years ago and I’ve got that machine and it still works and runs, and that is absolutely fine.

Sorry, the comment form is closed at this time.